That’s up to AS 23. R2 and R3 will work their way through the BGP attributes list to find the best path to get to prefixes in AS 1:

BGP (Border Gateway Protocol) uses a list of attributes for path selection. In this lesson, I'll give you an overview of the attributes and explain how BGP selects the best path.

OK, so I am right that ECMP (BGP multipath) in single AS case load balance only outgoing traffic (traffic from R1 to R2/3), but not influence incoming traffic (from R2/3 to R1)?

OK, so I am right that ECMP (BGP multipath) in single AS case load balance only outgoing traffic (traffic from R1 to R2/3), but not influence incoming traffic (from R2/3 to R1)?

thank you for your answer.
I have another question. It is possible to load balancing returning incoming traffic from R2/3 to R1? If yes, how to do?

I’m in this situation:
R1 = customer router (customer AS)
R2/R3 = ISP (both in our AS)
Customer is in cooperation with us (ISP).
Totally two BGP sessions between two ISP routers and customer router.
ISP to customer advertise only default route (0.0.0.0/0).
Customer to ISP advertise his public prefix x.x.x.x/24 assigned from RIPE.
Customer wants ECMP (BGP multipath) bidirectionally.

What should configure ISP for ECMP (load balance incoming traffic from Internet to customer) on both routers (R2/R3)?

Otherwise it would work only one way, not bidirectionally.

Thanks for reply.
Zdenek

In order to get all traffic from the Internet to internal devices to be balanced, R2 and R3 must advertise both routes as equally desirable to the Internet at large. This way both options will be viewed as equal cost paths allowing for the routing to be divided more or less equally across both routers.

A similar configuration can be found at this Cisco documentation. This example shows how BGP will be used to load balance between two customer routers to two ISP routers. But you can switch this around and look at the configs of the two customer routers from the point of view of the ISP.

Load Sharing with BGP in Single and Multihomed Environments

Load sharing allows a router to distribute the outgoing and incoming traffic among multiple paths.

A (perhaps stupid) question would be if you could trick a router to bypass the as-path length also using the prepending mechanism.

Thanks for this, I just fixed these errors.

A (perhaps stupid) question would be if you could trick a router to bypass the as-path length also using the prepending mechanism.

Hello Rene/Laz,
I have a design question and I am going to use the below topology as the reference. 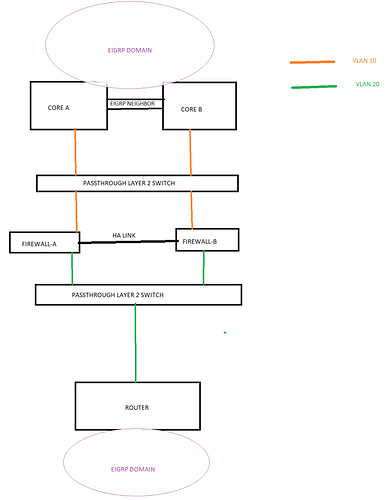 For me, both OSPF and BGP would work in this scenario. However, I would probably choose OSPF for several reasons:

I hope this helps you to further develop you topology and your implementation of what you need. Feel free to continue the conversation if there are still outstanding issues that have not been addressed, or if you have additional questions as a result of the discussion.

We know that BGP only advertises the best-path route to other BGP peers regardless of the number of routes in the BGP Loc-RIB.

By default BGP will indeed only advertise the best route. Unlike BGP, IGP protocols such as EIGRP and OSPF function differently.

OSPF routers within a single area obtain a complete map of the whole network. This means that all alternative paths are advertised, so the LSDB will contain all of the possible routes to a particular destination within an OSPF area. Of these, only the route with the best metric will be put in the routing table. If there are two equal cost routes, then equal cost load balancing will be performed for up to four paths (by default, but this can be increased to up to 32). You can find out more about that at this lesson.

EIGRP on the other hand, do not advertise all possible routes to each other, and thus, unlike OSPF, each EIGRP router does not have a full picture of the network topology. There are rules that dictate which routes will be shared, and which will not. These have to do with the successor, feasible successor, and other paths that do not fulfil the feasibility condition. The routes that are advertised, are placed in the topology table, but only the best route is placed in the routing table.
More about these mechanisms can be found at this lesson. If more than one route to a destination has the same cost, all routes will be placed in the routing table, and EIGRP will perform equal cost load balancing. It can also be configured to perform unequal cost load balancing. More about these features at this lesson.

If you want to perform ECMP, you can do so using the multipath load sharing feature of BGP. You can find out more about this at the following lesson:

Thanks for the wonderful explanation.

I wonder what type of load sharing algorithm does BGP use? Per packet, per flow. round robin?

The load balancing that takes place, whether OSPF, EIGRP, or BGP, is performed by CEF. CEF load balancing is configured on a per-packet round robin or on a per session (source and destination address pairs) basis. More information about the algorithms used by CEF for load balancing can be found at this Cisco documentation.

It could be an IOS version issue. According to this Cisco command line reference documentation, this command was introduced in IOS XR Release 3.7.2. What version are you using?

These terms are used to refer to the ways in which ISPs handle transient traffic. It describes how traffic is handed off from one ISP to another. In this context, we’re not talking about your local ISP that provides you with connectivity, but those ISPs (Tier 1 and Tier 2) that handle backbone Internet traffic. For more info on the Tier architecture of the Internet, take a look at this post:

Hello Giovanni You are correct, that if a provider does not allow its own network to become a transit network, then this can potentially cause problems to routing on the Internet. Remember that the Internet has a hierarchical structure. Within its structure, we have Tier 1, Tier 2, and Tier three networks. The following diagram shows an example of how these interconnect: [image] Tier 1 networks must route all traffic that they receive, to any other connected network. Tier 2 networks must …

Remember that these ISPs have multiple connections to other ISPs at various areas within their networks. When a packet is received, and it must be handed off to another ISP, it can be handed off at one of many different connection points.

Hot potato routing is the practice where ISP A will take a packet and route it to the closest available exit point of its own network to ISP B (or C, or D, or …), even if that is not the most efficient way to route it. In such a case, ISP A is essentially relieved of any further responsibility to the packet, and it is now “ISP B’s problem”. This policy is the most common that can be seen in networks, and is based on the peering agreements between ISP A and ISP B (and other ISPs). ISPs will keep track of the traffic ratio (the ratio of traffic flowing in one direction to that flowing in the other direction between peers), and if it is fairly even, then hot potato routing is acceptable and fair, because the ISPs will evenly share the burden of such exchanged traffic.

Cold potato routing is the (more expensive) practice of keeping traffic within an ISPs network for a larger part of the journey, by routing the traffic to the exit point from the ISP’s network that is closest to the final destination. This allows ISPs to provide higher quality network services to their customers. Content providers prefer the use of ISPs that offer cold potato routing because their payloads and the quality of the services they provide depend upon the timely delivery of traffic.

Hi Rene,
How can we achieve unequal load-balancing in BGP? If we have two upstream providers, is there a way to do 60-40 loadbalancing?

BGP is capable of achieving unequal cost load balancing for both iBGP and eBGP. In order to do this, you must first configure the maximum-path value to be 2 or greater, as shown in the lesson. Now, if you have two paths with equal weight, local pref, AS_PATH length, Origin, and MED, then you will achieve equal cost load balancing.

To achieve unequal cost load balancing, you must use the additional feature called dmzlink-bw. This feature will enable and configure BGP to distribute traffic proportionally to the bandwidths of the links.

More information about this command, the syntax, and how it is to be used can be found at the following Cisco documentation.