Hi Rene, Please change the below

And let’s verify that both routers have learned the multicast router through its general queries:

And let’s verify that both switches have learned the multicast router through its general queries:

Thanks Sean I just changed this.

Let’s say I have 4 VLANs (but IGMP is not needed on VLAN 300 and 400) and I want to use a switch for IGMP querier duties as pfSense 2.3.2 does not support IGMP Proxy. The bug has not been fixed.

Hi, if etherchannel is used to trunk the 2 switches, does all the multicast traffic “flood” the trunk when the IGMP querier is enabled - basically the switch automatically makes the trunk an mrouter port and forwards all multicast traffic.

This is what I’ve been told at least. We are trying to do very high bandwidth, high quality video streams (a kind of IPTV config), and I’m told that the 80gpbs trunk link is being saturated by the many (75 channels) of 8Gbps (4k uncompressed) video streams we have on the network.

This is Layer 2 only, we don’t have Routing licenses to enable PIM-SM.

We are not Cisco experts, and this is happening at a customer site.

Your traffic should only be flooded if your switches don’t have a “router port” for multicast in your topology. This might depend on your switch model / IOS version though. Most switches will drop membership reports and flood your multicast traffic.

Adding snooping querier to your interfaces adds a “router port” to the topology so it solves the problem of flooding, not causing it.

Do you have multiple VLANs? Is it enabled on each VLAN?

There is no need to enable PIM on any interfaces in your case, you only need this if you want to route multicast traffic between subnets. IGMP snooping querier is enough in a L2 topology.

For IGMP snooping without a router, it states that “H2 will not receive anything. SW2 will receive the IGMP report from H2 but doesn’t know a router port, so it doesn’t forward the IGMP report towards SW1.” But in the paragraph above it states “switches are flooding all multicast traffic now, treating it like broadcast traffic.” If it’s flooding all ports, then it would seem to me that SW2 would receive the traffic and then in turn H2 would. Please explain why it doesn’t quite work that way. Thank you.

It depends on the switch / IOS that you use. In my case, I used 3560s and those drop the IGMP reports and just flood multicast traffic so in that case, H2 does receive the traffic.

Other switches might accept the IGMP report and not broadcast multicast traffic when they don’t have a router port. In that case, H2 will never receive anything since SW2 doesn’t know where the router port is…it can’t forward the IGMP report to SW1.

Hi,
I have a question using Multicast without a Router. The topology with the ip addresses is attached.
Some questions:
Is this Setup Working? (due to different Subnet)
I assume Yes , because of IGMP snooping, SW2 and SW3 knows where to forward the Multicast traffic.
Is the main reason für a multicast router to have a querier in the network ?
Thanks a lot in advance

Rene has a lesson dedicated to this very question. You can find it here.

However, to provide a quick answer to your questions:

Is this Setup Working? (due to different Subnet)

Yes it should work. In Rene’s lesson, he provides to solutions to making multicast work without a router. One is to make one switch a querier. The other is to configure PIM on the SVI interface of one of the switches. Take a look at the lesson for more details.

Is the main reason für a multicast router to have a querier in the network ?

Essentially, yes, this is one of the fundamental functions of a multicast router.

Hello Laz,
thanks for your reply and your answers. I already studied your mentioned lesson before my post. Main difference between the lessons architecture and mine was, that I had two separate Subnet, whereas in the lesson all equipments were located in the same subnet.

Does the attached look like a “healthy” debug from an IGMP debug. This was taken from the “querier”. It is a multicast environment with no Layer 3 router as such. I see there seems to be V2 and V3 messages also. Is there anything there that looks of immediate concern?

Looks OK to me. The “Report has illegal group address 224.0.0.113” messages that you see are normal. The 224.x.x.x range is link-local multicast so these are ignored.

I have a problem in real life with igmp. I have two host that send imgp version 3 between two diferent interfaces VLAN (SVI) they need to see igmp version 3 each other. With the command ip igmp snooping querier will hosts see the igmp version 3 eventhough they are in separate VLANs and broadcast domain?

If you have a setup where you have two VLANs and you require routing between them, then IGMP Snooping without a Router is not a solution for this. These solutions are only for scenarios with a single VLAN.

The ip igmp snooping querier command will make the SVI port of a switch a querier, but it will not be able to route IGMP messages to other VLANs, but the will remain only within the specific broadcast domain. If you have such a scenario, it is better to go for using a multicast router since you need the routing functionality.

Thank you !
This works

I don’t entirely understand yet the behavior of a multicast stream in a network with VLANs, without router.

As an example, let’s take the following topology: 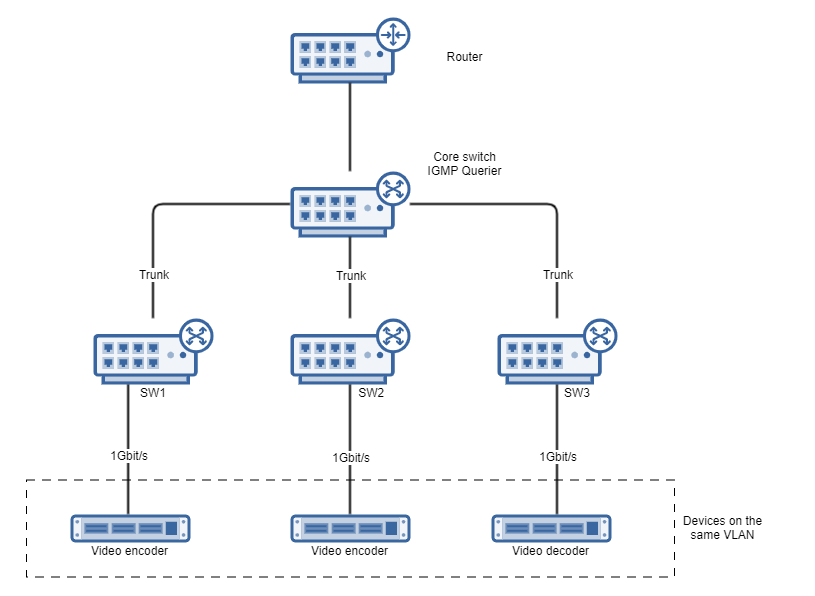 IGMP Snooping is enabled on all switches with the Core switch being the Querier.

Can you please shed some light on this?

When you enable IGMP snooping on all switches, they will all function in such a way so that they won’t forward traffic through ports from which IGMP has not requested a stream. So in the scenario that you describe, SW1 would be informed that there is no requester of traffic so, the multicast stream will stop at SW1. Notice in the lesson that SW1 was made the querier, and the debug of SW2 shows the following output:

So port Fa0/24 (the port that connects to SW1, the querier) was added to the group, so multicast traffic will be sent from that port. If no mroute is detected (that is, there is no host actually requesting the stream), the traffic will not exit any of the ports on SW1.

Thank you for your reply.

I’m confused by the following text from the particular approved response on this forum:

It seems that this response is different than what I understand from this explanation, right?

After doing a little more digging, I have found that for IGMP snooping using a querier, it is not the multicast membership requests that enable multicast traffic to be sent via switch ports, but it is the periodic general queries that the quierer sends. In the lesson, the membership requests were already being sent when the querier was enabled, so port Fa0/24 was added immediately.

So yes, I stand corrected, the querier is the location to which all multicast traffic is flooded within an L2 network where IGMP snooping and a querier are enabled.