BGP additional paths let your iBGP routers advertise multiple additional paths next to the best path. This allows you to use load balancing, multipath, improve convergence and more. This lesson explains how to configure this feature on Cisco IOS...

This image below of the network topology has the same IP addresses for all links, which makes it a bit confusing if you didn’t read the configurations before hand.

You are right, that doesn’t really help

I just fixed this.

Hi Rene,
I have learnt lots of networking stuff in your plain way . God bless you . carry on dear .Thanks

For eBGP additional paths is working by default, is this correct ?

I’m afraid not. eBGP only advertises a single best path to its neighbors.

Dear Rene,
I am confused about this stuff:

Could you please give me a short explanation?

These options make more sense if you see them in action. Try to recreate the topology I did in my lesson. When you try each command, look at the BGP and CEF table to see what is actually advertised/received/installed on each device. That makes it much easier to understand all of this.

Dear Rene,
If you want to send addtional-path for your neighbor:

Yes, that is absolutely right!

hi Rene and staff,
thanks for always replying to my posts

Just a simple question about what happens just behind configuration R1 to R6 before any consideration about additional paths
R4 and R5 learn Net6 (6.6.6.6) via eBGP (next-hop=R6) = OK
R5 has another path to Net6 via R4, but R4 has not the symetric path to Net6 via R5
This is surprising because the topology is symetric

I think the reason is:
R2 as the reflector prefers R4 to go to Net6 (that is the best choice from its perspective)
So, to go to Net6, R2 (the reflector) only advertises the path via R4 to his clients R4 and R5: R5 gets this path (so R5 install a path to Net6 via R4 in its BGP table) and R4 gets also this path from R2, but in this path the next-hop is itself => so this is done
This is why, in R4, there is not a path to Net6 via R5
I just want to know if i am right ??

thanks for always replying to my posts

That’s what we’re here for!

Your explanation is correct. I suggest you try shutting down the ports you mentioned and allow BGP to reconverge. You should get the behaviour that you predicted.

When R1 and R3 are configured to receive the additional paths I can see that the “neighbor 2.2.2.2 additional-paths receive” command is under “router bgp 12345” mode. Shouldn’t the command be under “address-family ipv4” mode?

In order to keep a consistency across all routers, it would be a good idea to configure this command under the address-family ipv4 mode. However, it would still function with this configuration since IPv4 is being used for both adjacencies and prefixes.

I am still a bit confused on the following…

I understand I need both statements to get this working… but in my mind, i always thought “send”
is “advertise”.

Is there any method to picture or think around this?

The neighbor neighbor-id advertise additional-paths all/best/group-best command indicates which paths will be advertised in that neighbor adjacency. All of them? The best and second best paths? Or the group best paths as defined in the lesson?

So the first command enables the feature between the specific routers, while the second command specifies what kind of paths will be shared.

Thank you very much for the replies.
This helps to clear up my confusion totally.

Can be some dumb questions and sorry I have not labbed this up yet.

I will give it a read once again, but any explanation will be helpful.

Can we use additional path install command for paths received in bgp table from different neighbors? For example, I get 10.0.0.0/8 from Neighbor A and B, can I use this feature to have one of them as backup route?

Yes you can. Actually, this is precisely what the feature is used for. This can be seen in the lesson, where R2 as a route reflector learned two paths to 6.6.6.6 (from R4 and R5) and advertised them both to R1. With the appropriate configuration parameters, this resulted in the installation of a backup path in R1 as can be seen in the below output: 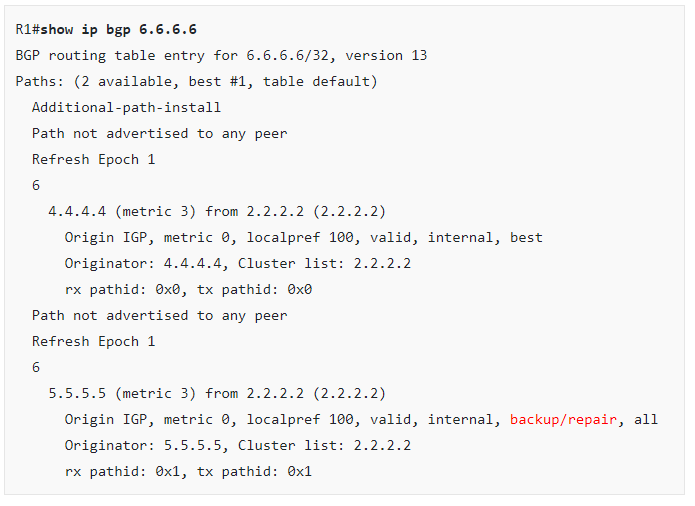 If we enable maximum-path 2 ibgp on the RR (R2) in this case, won’t it advertise both the paths from R4 and R5 to its clients avoiding all this additional configurations?

Note here that the “additional paths” and “maximum paths” features are slightly different. You can use the maximum paths feature, but it will function a little differently. Specifically, Cisco states that:

On the other hand, the bgp additional-paths install command triggers computation of a backup path or best-external path.

This info is retrieved from this Cisco documentation.

It is mentioned that this feature is fro iBGP but for the group best, it is selecting paths from different ASes which is eBGP routes , so is it contradicting , Am I understanding something wrong?

You are correct that the specific paths being mentioned in the groups are from other AS’es, so we’re looking at eBGP. However, a Route Reflector that is in AS4 for example, may have routes to AS1, AS2, and AS3 via eBGP. However, these routes are advertised via iBGP to other routers in AS4. All the next hop routers may be in the same AS, thus these routes would be shared using iBGP, even though they are indeed destinations outside of the AS.

Hi Guys
What about the behavior of R2 for the 6.6.6…6/32 destination ? The BGP convergence on R2 will be right away because it has already installed 2 alternatives in its BGP table:?

Let’s suppose that R4 is dead and only we have 5.5.5.5
R2 doesn’t need BGP additional feature to configure an install 5.5.5.5 as a backup route to improve BgP convergence?