Can you give me a definition of CED in networking design.

I saw that sometimes people give different meaning of this therm.

I am not familiar with the CED acronym in the context of network design. Can you give a little more information about CED including what the acronym it stands for so we can answer your question? Thanks!

Maybe CED can be intended as OLT room?
To avoid confusion, can you give me any examples of CED therm in IT Technology?

An OLT is an optical line termination or optical line terminal which is a device that terminates the service provider end of a Passive Optical Network (PON). In a PON, a single fiber port on such a device can serve multiple endpoints, in some cases up to 256 fiber to the premises (FTTP) subscribers by using multiple passive optical splitters to physically split the fiber without any additional active devices. The subscribers share the available bandwidth of the port between them.

Now even in the context of OLTs and PONs, I still don’t know what CED is. Do you know what the letters stand for?

Hi
Thanks for the reply, sorry I’ve not specified that is an Italian acronym that stand for data processing center.
I understand that is used to indicate the location where IT infrastructure is located ( like a server we farm ) but I’m not sure about that.

OK great, thanks for the clarification! No problem, when language barriers get involved, it’s not always easy…

So doing some research I have found that the acronym CED, which in your beautiful language is Centro Elaborazione Dati, is essentially translated into Datacenter in English. So getting back to your original question:

Can you give me a definition of CED in networking design.

A datacenter has traditionally been defined as a dedicated space or room within a building that is used to host computer systems such as servers, storage systems, telecommunications, and networking components and devices. Within the traditional two-tier or three-tier hierarchical network design model, the datacenter would be connected somewhere between the distribution and core layers of the network, in order to be accessible by all network devices on the network.

Datacenters themselves have internal design models as well, that mirror the traditional hierarchical design model, but with different layer names and roles. The following is an example of this: 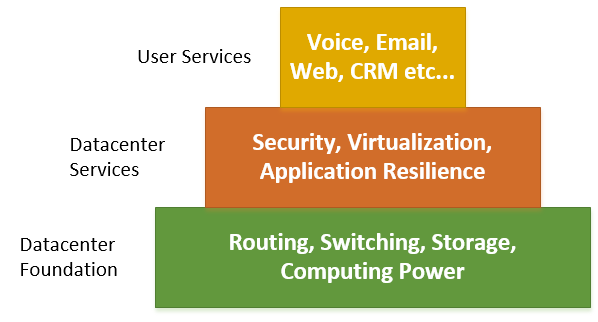 There are many non-computer or networking considerations to take into account as well. These include physical security and access, temperature and humidity control, power redundancy (UPS generator combination) as well as the appropriate infrastructure such as a raised floor and rack space for the running of cables and the physical installation of devices.

Now in the above description, I’ve been using the term “traditional” because this is the most basic configuration and the simplest. Datacenter design has been developing very rapidly with many innovations and developments including virtualization, cloud-based datacenters, hosted datacenters as well as the modification of the traditional hierarchical model with a spine and leaf architecture.

There’s so much to be said about datacenters that I won’t go on here. But you can suggest a lesson or a group of lessons on datacenters at the Member Ideas page as others have done. But in the meantime, a good place to start, from a Cisco point if view is to take a look at this Cisco documentation that speaks about datacenter architecture.