This lesson explains how to configure Cisco ASA NAT exemption. This is useful when you want to exclude traffic from being NAT translated.

Because the two ASAs and the S3 server are on the same subnet in the topology, you can simply use a switch to represent the cloud. The prerequisite is that connectivity is achievable between those devices.

Hi Rene and staff,
i lab this lesson in GNS3 like this 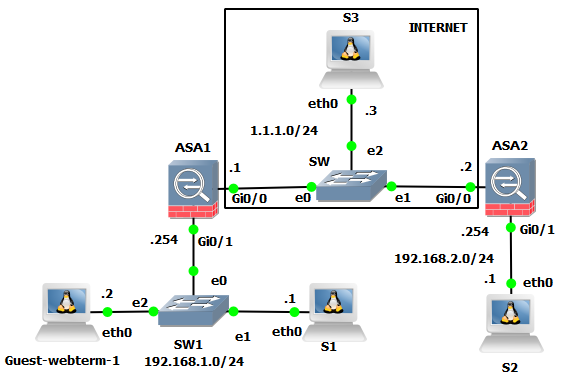 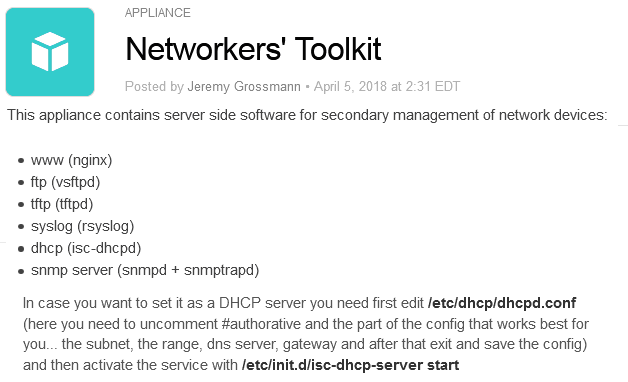 Guest-webterm is a linux GUI client with firefox, build with the GNS3 appliance Webterm

My lab works fine, but i want to add these comments and questions
1)
i prefer to name the internal subnet object as “INTERNAL” rather than “INSIDE”, not to be confused between a network object and the name (if) of the internal interface.
So the nat configuration becomes

For your NAT, you’re saying this.

If both source/destination stay the same, we are exempting them from all NAT statements, especially our PAT statement for internet traffic so they match our crypto ACL for a tunnel. This is called a NAT exemption for this reason.

You need to configure some variable within a tunnel group depending on the type. So you create it like you did with the tunnel-group NAME command. But you also need to clarify values.

For an IPSec RA tunnel for example, you need to configure some attributes.
tunnel-group "tunnel_group_name" general-attributes
In here you configure things like authentication servers, default group policy to reference.

Could you clarify this command step by step, because i am confused with the repetition of the network objects ?

What’s happening here is something called “twice NAT” and is used to identify both the source and destination address in a single rule. As stated in this Cisco documentation:

You can find out more about Identity NAT at the following Cisco link:
https://www.cisco.com/c/en/us/td/docs/security/asa/asa95/configuration/firewall/asa-95-firewall-config/nat-reference.html#ID-2091-0000038c
You can also find out more at this post:

Hello Alberto This is actually correct. This is what is called “Twice NAT” or “Identity NAT”. Take a look at the image of the network: [image] The ASA has NATing enabled, so any traffic going from INSIDE to OUTSIDE, or visa versa, will be NATed. The VPN client on the OUTSIDE network is on the 10.10.10.0/24 subnet. When it connects via VPN, its connection is tunneled over this subnet, and the internal IP address it is provided is in the 192.168.10.0/24 subnet, which is configured in the …

Also i am confused with the place of the NAT commands: why are some NAT commands inside network objects, and some others in general config ?

This has to do with the way in which NAT is applied. When the NAT statement is within the object, this kind of configuration is called network object NAT. It’s a quick and easy way to configure NAT for a single IP address or a range of addresses, or a subnet. The NAT command within the object is applied to the similarly configured subnet within the object. You can find out more about it here:

Looking at the lesson I do see a typo where the NAT statement was outside the object, so I’ll let Rene know to fix that…

Where you used “authentication pre-share” with IOS in phase 1, you have to use tunnel-group with ASA, is not it ?

This command will specify a tunnel-group, but you must create and configure the tunnel-group for it to function. This can be done using several command modes including:

One or more of the above should be used to enter the configuration mode of the particular attributes for this tunnel group. More about this can be found at this Cisco ASA command reference:

You can find out more details on how to configure these and what all of their parameters are at the following Cisco documentation:
https://www.cisco.com/c/en/us/td/docs/security/asa/asa95/configuration/vpn/asa-95-vpn-config/vpn-groups.html

Note that the entities called “tunnel-groups” are now called VPN connection profiles, however, the syntax seems to be the same.

I’ve tried this same config but the exemption only works on my topology when the NAT exemption statement is above the NAT statement for internet connection.

but when I swapped the 2nd and 3rd, the traffic coming from behind of the ASA will go through 2nd statement, not to the 3rd which is for the exemption.

So I’m curious how to make this configuration “dual-stack”, that is, I want to include my IPv6 stack through the same tunnel that was established on the IPv4 network (or do I need to create a separate IPv6 tunnel for the independent traffic?)

Specifically, in the ACL that defines what traffic to encrypt, you can add IPv4 and IPv6.

Looked at what he did and its along the lines of something I was trying, but the “work around” was to use IKEV1 for IPv4 and IKEV2 for IPv6 so that the two tunnel protocols wouldn’t run into one another. The issue however is now your doing two different setups when I wanted to eliminate IKEV1 from my overall system.

Its weird that for over a decade everyone is trying to be “dual-stacked” in the ISP business however there is so little support for actually doing dual-stacked (nor documentation). Lots of examples of IPv4 or IPv6, but never with both at the same time.

Indeed it is frustrating that no such precedent has been set. Unfortunately, there is little documentation about this and I haven’t been able to find others that have successfully created a single dual-stack IKEv2 VPN. It may be worth doing some further experimentation or raising it as an issue on Cisco community Cisco learning network forums.

I wish we could have been more helpful!

Hi there,
I have read the threads and came across Twice NAT, which had been mentioned previously. I also read the Cisco documentation but need some advices for clarification.

I quoted the following from your chapter.

"ASA1(config)# nat (INSIDE,OUTSIDE) source static INSIDE INSIDE destination static LAN2 LAN2
The rule above tells the ASA to translate traffic:

You are indeed correct. This is a typo, and the statement should read:

Rene has corrected the typo in the lesson.

From the above list I quoted, please enlighten me as I’m quite confused.

As this is not bidirectional, Wouldn’t traffic from 192.168.2.0/24 (inbound) still be blocked and ASA won’t be able to communicate with each other? Am I missing something here?

You must remember that access lists can be used for two fundamental purposes: to filter traffic, and to classify traffic. If we were to apply this access list to an interface in an inbound or outbound direction, then the access list would indeed be used for filtering, and it would permit and deny traffic.

However, in this case, the access list is not applied on an interface, but is referenced to the proposal in the very next set of configurations:

This command will use the ACL to match traffic and classify it (it will not filter it). Matched traffic will be encrypted, and traffic that does not match will not be encrypted. From the point of view of ASA1, the matched traffic is any packet that has a source IP in the 192.168.1.0/24 network and a destination IP in the 192.168.2.0/24 network. From the point of view of ASA2, it is the other way around.