According to most Cisco documentation it is one of the necessary steps in order to have the redundancy function. If it was optional, it usually states it as optional in the configuration examples, however it does not. Having said that, the name designation is not necessary and GLBP works fine without it. I believe it is just a label that you can add to make your configuration easier to understand. I’ve read that the high availability group name is referenced in Stateful NAT as well, so it may have some uses that are beyond just labelling.

I couldn’t locate the .254 on GLBP lesson. I think you confused it with the HSRP lesson where the virtual GW is .254

HSRP is a virtual gateway protocol for Cisco devices, in this lesson you will learn how it works and how to configure it.

This lesson explains what GLBP (Gateway Load Balancing Protocol) is about and how to configure it on Cisco IOS routers.

I thought you were talking about configuration wise.

Thanks for pointing that out, I’ll let Rene know…

Thanks Dion, just fixed it!

A small remark: I believe at the end of the chapter, for SW1 configuration, the interface GigabitEthernet0/2 should be a routed port (no switchport).

Hi. What if SW2 was AVG? What I am trying to achieve is: If both links fails the SW1 should be AVG. I tried to simulate this with preempt option but no success. Please see my config:
SW1:

Keep in mind that an AVG and an AVF are two different things. The priority value configured will determine which switch will become AVG, but the weighting values will determine if a particular switch will be an AVF. Remember there is only one AVG, while all functioning switches in the group are AVFs.

Now in your scenario above, SW2 will be AVG. Even if both links to the router fail, it will still remain AVG. This is because even if both links fail, SW2 and SW1 still maintain a connection between them via the 192.168.1.0/24 subnet, so there is no reason why SW2 cannot continue to function as AVG. Remember, the AVG is responsible for answering Address Resolution Protocol (ARP) requests for the virtual IP address. Load sharing is achieved by the AVG replying to the ARP requests with different virtual MAC addresses. SW2 can continue to do this even if both its links fail.

If the currently active AVG fails in this function, only then will the backup AVG take over.

There are multiple methods for load balancing:

I’m not sure to understand the difference between glbp priority and glbp weighting.

Also I’ve tried to replicate this lab but I think that a routing loop is occurring during pinging the loopback of R1.

can you help me? 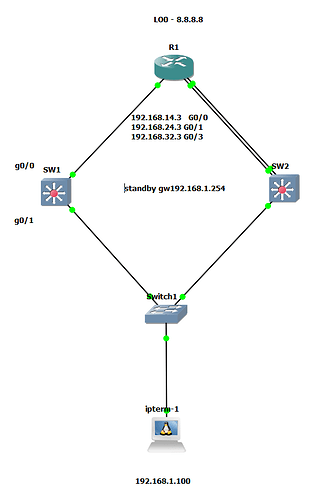 The glbp priority parameter affects which device will become the AVG. Remember there is only one AVG and it is the device that assigns the virtual MAC address to all other devices running GLBP. Priority has nothing to do with which how data traffic will be forwarded.

The glbp weighting parameter on the other hands, is used to determine if a device will become an AVF. Remember there are multiple AVFs in a GLBP group, and an AVF is simply a device that will forward traffic. So weighting ultimately affects the number of available devices through which traffic can be forwarded.

Concerning the wireshark captures that contain the frames designated with the “loop” protocol, this doesn’t necessarily mean that you have a loop in your topology.

The Loop protocol, more correctly referred to as the Ethernet Configuration Testing Protocol (CTP) is an obscure protocol that has been part of Ethernet since it’s inception by the DEC/Intel/Xerox consortium created the Ethernet v2.0 specification. It’s not even defined at all within any of the IEEE 802 specs. It is a protocol that can be considered as a layer two ping equivalent. Some more information about it can be found here:

It can be thought of as an Ethernet keeplaive message that can be used to detect loops. As you can see all loop frames have the same source and destination MAC addresses. It is used to detect self-looped ports. If a switchport receives a loop frame it sent to itself, it would be put in err-disabled state. It has been found however by some users that the loop protocol is actually ignored by some platforms while others still use it.

Now it is interesting that you see these frames in your ports. This gives me the impression that you have not configured the ports on the switches connected to the router as routed ports. So the “router facing” ports on the switches should be configured as routed ports (i.e. no switchport). This way no loop protocol frames will be seen on these ports. Also, do some troubleshooting with STP to see if there are any blocked ports to see if you actually do have any physical L2 loops. Based on the topology, there should be no ports blocked by STP.

Take a look at those aspects of the topology to continue your troubleshooting, and let us know if there are additional questions that come up.

Once again just like with VRRP, HSRP and GLBP any of you that are using GNS3 and happen to be having trouble getting the devices to talk to one another and become active/standby and it does not work despite having layer 3 connectivity and everything being configured correctly.

You need to use the global config command:

I had to do this on IOU L2 images, show version output here:

Thank you Mathew. That command was helpful to me.

I don’t quite understand one part of your comment here: " SW2 will be AVG. Even if both links to the router fail, it will still remain AVG. This is because even if both links fail, SW2 and SW1 still maintain a connection between them via the 192.168.1.0/24 subnet, so there is no reason why SW2 cannot continue to function as AVG." Per Patryk’s configuration, if two links fail, then SW2 priority will be 120, which is lower than 150, why won’t SW1 be the AVG since it has higher priority now?

Let me clarify. Take a look at the topology of the lab: 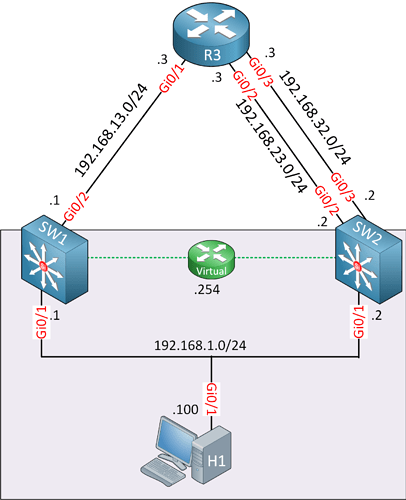 image1453×1786 323 KB
SW1 and SW2 can communicate with each other over their Gi0/1 interfaces in order to determine the AVG, and the AVF. Even if the links towards R3 fail, this link remains active.

However, Unlike the AVF, the role of the AVG doesn’t require this link to R3 be active. So SW1 can remain the AVG, even if its Gi0/1 link goes down. The only failure that will cause another switch to take over the role of AVG is if the switch itself fails (power outage, corrupted IOS, the GLBP process fails) or if the Gi0/1 interface fails and communication with SW1 is lost.

if two links fail, then SW2 priority will be 120, which is lower than 150, why won’t SW1 be the AVG since it has higher priority now?

Actually, if two links to the router fail, the AVG priority will not change. However, the weight which determines the AVF will change.

Q1) I want to know can we enabled tracking for AVG+AVF and AVF b/c just in case suppose AVG connectivity to R3 goes down means no more redundancy in a network?

Same question for VRRP and HSRP where we use concept of active and standby?

Q2) In GLBP tracking can only be enabled if we are having connectivity of AVF to R3 by
two links?
Reason for asking second question is b/c we are using here concept of lower and
upper threshold value , is single threshold can also be used ?

Q1) I want to know can we enabled tracking for AVG+AVF and AVF b/c just in case suppose AVG connectivity to R3 goes down means no more redundancy in a network?

Tracking is a feature that is useful only for the AVF and not the AVG. The AVG is only responsible for assigning the virtual MAC to all the AVFs (including itself) and responding to the ARP requests of hosts for the gateway. All participating gateways will continually monitor each other’s availability, and if the AVG is no longer reachable by the other gateways, only then will the backup AVG take over. The AVG does not depend on the state of the interfaces. AVGs are chosen based on the configured priority.

The AVF on the other hand does depend on the state of the interfaces, and it is the AVF that can be affected by the tracking feature. The lesson describes this feature in full.

Same question for VRRP and HSRP where we use concept of active and standby?

For VRRP and HSRP, take a look at there respective lessons.

Q2) In GLBP tracking can only be enabled if we are having connectivity of AVF to R3 by
two links?
Reason for asking second question is b/c we are using here concept of lower and
upper threshold value , is single threshold can also be used ?

It depends upon the resulting weight factor if one of those links goes down. The weighting as well as the lower and upper threshold values, are useful if you have multiple uplinks. If you have a single uplink, such as is the case with SW1, then the tracking will simply use the state of that uplink alone to determine the forwarding status. But the weighting gives you more control over which situations will cause a device to no longer be considered an AVF.