I’m working on the following lab in GNS3vault: 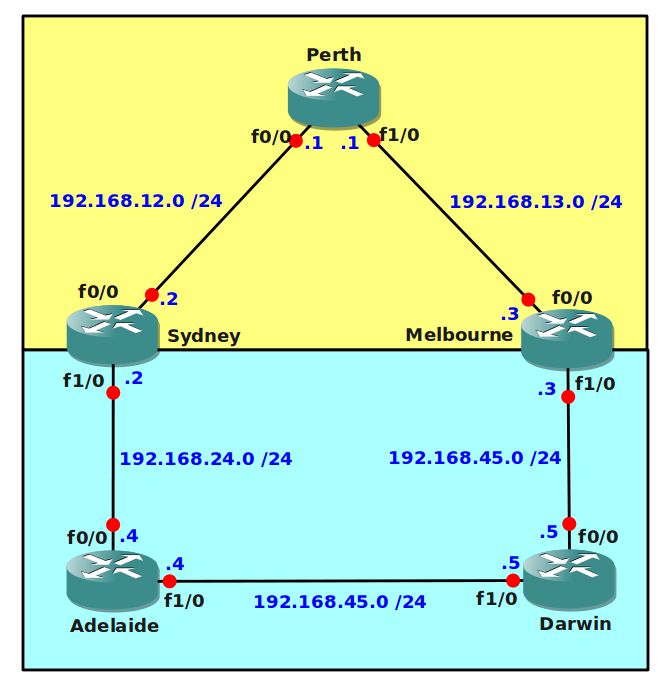 Redistribution between RIP and OSPF is one of those topics you need to master for CCNP. This lab teaches you how to do it.

I understand the video solution and it makes total sense. However, there seems to be a problem on router Perth. All redistributed routes show up twice in the routing table as a result of equal-cost load balancing. The instructions say that the most optimal route should be used. However, we can’t use route-maps, distribution lists, or prefix lists. The only way I know of having these distributed routes with only one entry in the routing table is to either use a static route or the maximum-paths command. I thought maximum-paths would work but when the path type and path cost are the same it seems to keep first learned route in the routing table which may not always be optimal. How can I achieve optimal routing on Perth while fulfilling the requirements of the lab?

So I did my research a little more carefully and found that my statement above is incorrect, when there is more than one equal-cost OSPF route and you set maximum-paths to 1, it will choose the route with the lowest router-id. Without using a route-map, distribute list, or prefix list, or static route, I can’t figure out how to fix optimal routing for router perth? I was thinking of using the distance command with an ACL on Sydney and Melbourne but this isn’t working either.

I haven’t done this lab, but looking over the instructions, these are my thoughts.

Perth must route traffic destined for networks on all routers optimally. This means that any destination networks connected to Adelaide must be routed via Sydney and any destination networks connected to Darwin must be routed via Melbourne. A destination of 192.168.45.0/24 can go either way. So the only thing I can think of is to increase the cost of the f1/0 interfaces on the Adelaide and Darwin routers such that the advertisements of the metric to these routes via those interfaces will be higher, thus Perth should get different metrics for the two paths to the same destinations, thus choosing one over the other.

Again, I haven’t done the lab, but this might get you to start thinking about alternatives to the ways in which to do it. If this is not the case, we can ask Rene to give a better clue as to the way to achieve it.

Adelaide and Darwin are RIP routers so I can’t really increase the cost there. The metrics are done via the redistribution statements on Sydney and Melbourne but the lab states not the change those commands. I’m beginning to wonder if there’s any way to optimize the traffic coming out of Perth without using a route-map, distribute-list, or prefix-list?