HI,
I have a question on this point.
Doesnt ABR just generate type3 LSA or type 4 to let us know of ASBR.
Now in TSA, the only allowed LSA’s are 1 & 2. So how does ABR help ?
if an ABR is configured with default originate always, my understanding is that route alwas appears as an O *E2 or Type 5 or External route in the downlink routers . But I am seeing it as O *IA in my setup, R1 – R2(ABR) – R3(TSA) , pls let me know why ?
Addtionally in show ip ospf dbs cmd on TSA router , I see only LSA1 and Sumary Net link States (LSA3) being shown, should not LSA 3 be blocked on this ?
Note:THis is a office setup, working since ages, just chekcing my output there.
Thanks

if an ABR is configured with default originate always, my understanding is that route alwas appears as an O *E2 or Type 5 or External route in the downlink routers . But I am seeing it as O *IA in my setup, R1 – R2(ABR) – R3(TSA) , pls let me know why ?

When you use the default-information originate command (either with or without the always keyword), the router will generate a type 5 LSA. This means that you should indeed have an O *E2 route in R1 of your topology. Can you verify where you are applying the default-information originate command and where you are seeing the O *IA route and let us know?

Addtionally in show ip ospf dbs cmd on TSA router , I see only LSA1 and Sumary Net link States (LSA3) being shown, should not LSA 3 be blocked on this ?

You will see only a single “Summary Net Link States” entry which is that of the ABR. This is necessary for the stub router to know how to get out of the area. No other entries will be there since no Type 3 LSAs will enter the area from other ABRs.

Here are some of the rules when dealing with the stub and totally stub areas:

So yes, the rules apply to all.

Hi Rene/Laz,
I am going through the RFC2328 , unable to understand the topology or exact meaning stub networks , can you please relate to this definition on section 2.1 .

What is being described in these diagrams is the physical topology on the left and the graph that represents the link state database on the right. The use of ASCII text to create these may affect the clarity, so I will try to clarify.

The diagram on the left shows a topology with a router RT7 that is a stub network connected to the “rest of the network” represented by N3. The diagram may look like this:

The diagram on the right is a representation of the link state database in the form of a graph or table. These tables have verticies that consist of routers and networks. The specific graph can be represented like so, where RT7 is a router and N3 is a network. Note that in the RFC, each of RT7 and N3 are referred to as vertices of the graph. 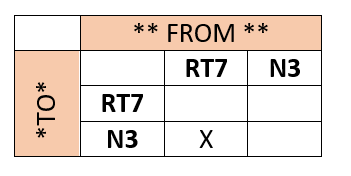 As stated in the RFC

Note that networks and routers are represented by vertices. An edge connects two vertices if the intersection of one vertex and another is marked with an X.

Now notice what it says in section 2.1:

The Autonomous System’s link-state database describes a directed graph. The vertices of the graph consist of routers and networks. A graph edge connects two routers when they are attached via a physical point-to-point network. An edge connecting a router to a network indicates that the router has an interface on the network. Networks can be either transit or stub networks. Transit networks are those capable of carrying data traffic that is neither locally originated nor locally destined. A transit network is represented by a graph vertex having both incoming and outgoing edges. A stub network’s vertex has only incoming edges.

So in the above table, we see that the X, also referred to as an “edge” in the RFC, indicates that the “network appears on the end of a stub connection in the link-state database’s graph”. In other words, the graph indicates that the network is a stub network since only the FROM RT7 TO N3 intersection is marked while not the opposite. If the opposite was marked as well (i.e. FROM N3 TO RT7) then the network would be considered a transient network.

These are constructs that are created to more fully understand how a router interprets and understands the link state database, and consequently acts upon the type of network being created. These tables/graphs differ depending on whether the network in question is a stub, a point to point network, or a broadcast NBMA network.

Can u explain me is there any difference between Backbone area and Standard area in OSPF Areas.??

When you configure an area and you dont specify it as Stub or NSSA then it is Normal area by default.

Backbone area is just a Normal area, it cannot be Stub or NSSA (otherwise you may filter routes, thus lose connectivity).

Every area has to connect to Backbone (Normal) area, because routes always have to pass
Backbone area to go from one area to other area.

If you are interconnecting two areas, one of them has to be Backbone area (0).

If you have two Backbone areas that are discontinuous, or if you need to extend Backbone area over non-Backbone area, you can use Virtual-Link or Tunnel. But VIrtual-Link is special feature made for this.

What @fugazz says is correct. Just a note here that the what Cisco refers to as a Normal area, many other vendors/professionals refer to as a standard area, so these terms can be used interchangeably.

The thing is that the terms normal/standard are not actually defined in the OSPF RFC so there is some flexibility.

Ahaa, so thats the thing here. People are refering to non-backbone area, that is not a stub or nssa as Standard area, good to know. I was learning OSPF from materials that did not used “standard” in terminology at all. Thanks for pointing this out.

Thanks Laz. this question is asked in interview.
and can u please provide details on ospf multicast and broadcast address.

OSPF uses two multicast addresses, specifically, 224.0.0.5 for all OSPF routers, and 224.0.0.6 for all Designated routers. These addresses are used to exchange hello packets and LSAs. Which address is used for which purpose depends on the network topology and the implementation of OSPF. Take a look at this post for more info.

Hello Markos Concerning question 1, there is no clear cut answer given for the destination IP address for DBDs from DROTHER routers in the RFC2328 describing OSPFv2. It states what kinds of packets use what kind of address (unicast/multicast) except for the DBD. Take a look at Pages 58-59 on the RFC. However, researching further, there seems to be a consensus that the DBD packets are sent to the unicast addresses of the DR and BDR. Now according to the RFC: On physical point-to-point netw…

I think the answers are Total Stubby and Stubby because in these areas no ASBR allowed.
But according the Cisco guide the 2nd answer should be NSSA Totally Stub.
I’m confusing a bit. Anybody clatify me?

The question is not completely clear, as it does not clarify what it means by “prevent type 4 and type 5”. Does it mean that those LSA types should not exist within the stub area? If so, then all of them should be correct. Take a look at the following table:

However, if we take the question to mean “prevent ONLY type 4 and type 5 LSAs and not Types 1, 2 and 3”, then the answer would be NSSA area and Stubby area as @fugazz suggested. The important thing here is to understand the functionality of the LSAs and apply that to any question that may arise in the exam.

Hello Michal,
Thank you very much!

Hello Laz,
Thanks a lot for clear explanation. The table is very helpful for me.

hi there,
I am learning routing at the moment but I have not gone through the dynamic routing protocols sections yet.
could someone tell me what is a stub router?
why default routes cant be configured at a stub router.

The term “stub” is most often used with the OSPF routing protocol. It is used not to refer to a router, but to a non-backbone OSPF area that has only one ABR that connects it to the backbone area. For more info about this, take a look at the following lesson:

OSPF has special area types called stub areas. In this article we will look at the stub area, totally stub, NSSA (not so stubby) and Totally NSSA.

When referring to the EIGRP routing protocol, the term stub is applied to a single router. In this case, a stub router is one that has only a single route to “the rest of the network”. You can find out more about that at the following lesson:

This tutorial explains the different EIGRP stub options and explains how to configure them.

why default routes cant be configured at a stub router.

Default routes can be configured on a stub router, and it is best practice to do so. In both the cases of a stub area and a stub router, a single default route should be used in order to simplify the routing table. In order to more fully understand this concept, I believe it would be best if you went through the lessons for these routing protocols so that you can more clearly understand the implications of the term stub and how it is applied in each case.