Hi,
Do you have and config example of mstp with multiple regions?

Beyond what I have already shared with you, we don’t have an example of MSTP with multiple regions. However, under the following link, you can suggest topics and lessons for Rene to add to the site.

Feel free to share any and all of your ideas!

for your information : in french lenguage, MST means “Maladie sexuellement transmisible” (a sexual desease). then we prefer to call it MSTSP (MST Spanning tree)

Thanks for mentioning that, I’ll be sure to use MSTSP for my French-speaking friends… It’s interesting to note what various acronyms mean in different languages… and to be somewhat careful in the use of some!

Is a MUST in a Service Provider enviroment where run have thousands of vlans configured and in production. I Work for an ISP and we have MST , the difference is the Root Bridges we use runs IOS XR (ASR9K) and its MSTP is even more complex, its called MSTAG (Multiple Spanning-tree Access Gateway)

Introduction In this document the concept of MST (multiple spanning tree) access gateway and the difference to regular MST will be highlighted. Also it shows some design scenarios of when to chose for which particular implementation. Spanning Tree...

Hello, I have a question regarding MST and VLAN prunning. I am using Pearson exam prep for the 350-401 and this question has me confused. They are showing C for the correct answer. Why am I prunning other vlans within that instance if the question is asking to Prune vlan 200? I answered A and it was wrong

You have been asked to prune VLAN 200 from the trunk link between SW1 and SW2. Which of the following actions should be taken to remove the VLAN when the network is running 802.1s?

A) VLAN 200 should be pruned from the trunk link, and the MST revision number should be incremented on SW2.

B) VLAN 200 should be removed from the VLAN databases of SW1 and SW2.

C) The configuration should be reviewed to determine which VLANs are in the same MST instance as VLAN 200 and then those VLANs should be pruned from the trunk.

D) The spanning tree topology should be associated with only VLAN 200, and SW2 should generate a TCN to purge the stale MAC table entries on SW1.

You answered this question incorrectly. The correct answers are highlighted.×
Explanation:
The MSTI topology is independent from the individual VLAN. It is a best practice to remove all VLANs that are part of the same MSTI when pruning is required.

When using MST, it is important to keep in mind that we are no longer dealing with a one to one correspondence of VLAN to STP instance. VLANs are grouped into instances, and the STP topology is determined by the instance and not individual VLANs, regardless of what VLANs are included in that instance.

This means that if we choose to prune only VLAN 200 from a particular trunk, we are actually trying to provide a different STP topology for VLAN 200 than that of all the other VLANs in that same instance.

For this reason, best practice dictates that if you want to prune VLANs in MST, all the VLANs in the same instance must be pruned. Otherwise, we are trying to create a different topology for VLAN 200 than for the rest of the VLANs in that same instance, and this is something that is not compatible with the operation of MST.

The following Cisco documentation details problems that can occur if you try to prune individual VLANs rather than all the VLANs in a particular instance:

This document states that:

For this reason, C is the correct answer.

Hello,
I’m struggling with MST. I follow the topic for MST and one of my switches has the interface role alternate for instance 0 and doesn’t see any other two instances. It’s the port fa2/0/23 on Sw2.
What could cause that issue? 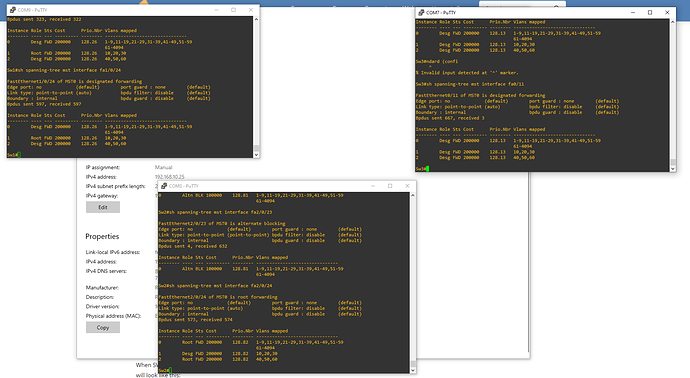 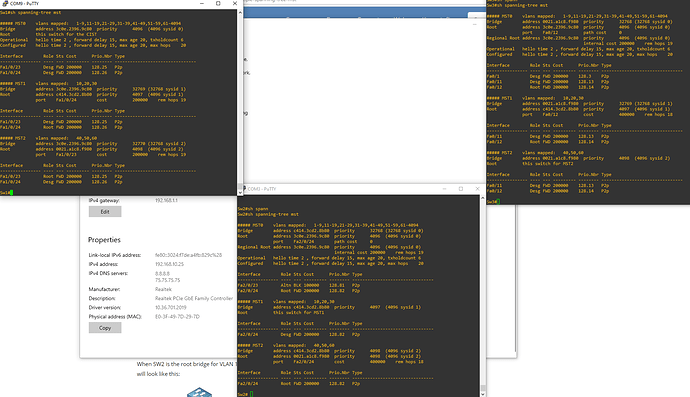 Hmm, that does seem strange. I labbed this up to It seems that this interface is not recognizing MST on the other end of the link. I suggest you take a look at the interconnectivity you have set up between the switches.
In your output of show spanning-tree mst on SW2, only port Fa2/0/24 appears. it seems port Fa2/0/23 is not participating at all in MST. Also, I see that SW1 has Fa0/12 as the root port for both MST0 and MST1 which should not be the case. This tells me that for some reason the connection between SW1 (Fa0/11) and SW2 (Fa2/0/23) is not correct.

Check this connection as far as trunk configuration goes as well as allowed VLANs, and correct physical connection (connected to the correct ports) and get back to us.

MST can be considered framework that allows for the organization of multiple instances of STP to function in an efficient manner by grouping them into instances. The actual STP mechanism that runs within each instance is Rapid Spanning Tree (RSTP). This is the case for both the IST, as well as all MST instances.

I assume you mean root bridge election. Remember that the bridge ID for any STP configuration is composed of the priority and the MAC address. But the priority itself is composed of a value between 0 and 61440 but in multiples of 4096. Why in multiples of 4096? Because PVST+ uses the system ID extension as part of the bridge ID. This is just the VLAN number. So if you’re using VLAN 24, and a priority of 4096, then the bridge ID is 4096+24 = 5020 plus the MAC address. For VLAN 25 PVST+ will use an ID of 5021 plus MAC address. So again, why 4096? because VLAN numbers range from 0 to 4095, and there must be enough “room” between priorities to fit in all possible system IDs or VLAN numbers.

So when MST listens to PVST+ BPDUs it receives on its boundary interface, it checks to see if they are superior compared to the VLAN 1 BPDU from PVST+. If they are superior, then the interface will be blocked and will show a broken state.

For this reason, PVST+ BPDUs must have a priority that is at least 4096 lower, in order to ensure that any VLAN value (between 1 and 4096) will not make the PVST+ BPDU superior, and result in a broken state.

Regarding the compatibility matrix, what type of STP are compatible and how are the interactions?
The following lesson is helpful for examining the interoperability between MST and PVST

MST and PVST are compatible spanning-tree protocols. This lesson explains how these two different spanning-tree versions work together.

You can find additional information about various types of STP at the following Cisco documentation.

I’m currently doing some labs related to MSTP and there is something that I need to investigate :
On S8, I just do a simple “int vlan 2020; shutdown”, following this one, I can see many flap on other vlan interfaces so I was suspecting some events on my mstp topology and with the debug on S7 :

I understand thanks to your course why I see the dispute message in my debug (after my action, BPDU received from S8 we can see port role changed from root to Designated) but I still don’t understand why this simple action on vlan interface number 2020 caused this mess.
Vlan 2020 belongs to MSTI 2. We can see the first notification is the vrrp role changement which is as expected.

Any clue on this one ? 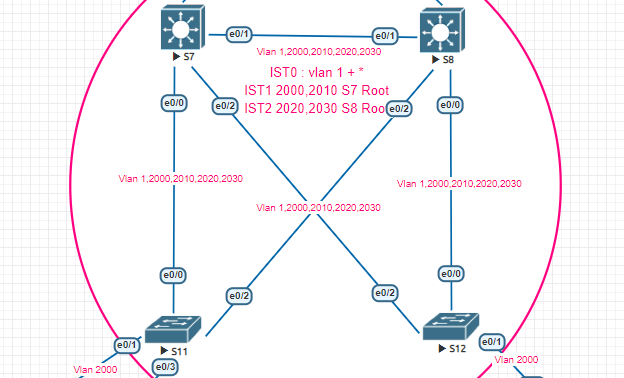 Thanks for posting, and welcome to the forum. Sorry for the late reply!

It seems that you are running into a common L2 IOU error that is often seen in GNS3, so the root of the problem is not associated with your MST configuration. However, since you are having issues with your L2 topology, MST is obviously adversely affected.

Can you try to replicate your topology using Cisco’s free CML sandbox?

Is there something that needs to be configured to use ISL with MST? I just tried to set up a simple virtual lab with three switches running MST. Using ISL (no encapsulation specified on the trunks), I could not get any traffic to go on non-native VLANs. Configuring the trunks for dot1q encapsulation fixed it.

There are several parameters involved here, and one of them has to do with the platform on which you are configuring your topology. You mention that you are using ISL, and no encapsulation is specified on the trunks. Depending on the platform, this will have different results. Most modern platforms use dot1q by default, so if you don’t specify the ISL encapsulation, dot1q is being used. If you want to use ISL, you must specify the switchport trunk encapsulation isl command on the trunk.

Now without knowing more about your configuration, it is difficult to determine why your topology didn’t function, however, MST does indeed interoperate with ISL trunks. You can think of the two as separate entities that are not directly dependent.

Can you give us a little more info on your topology so we can help you in the troubleshooting procedure?

Thank you for the reply, @lagapides ! A topology diagram and code snippets are below.
I am using virtual switch software that defaults to ISL. Here is what I see:

I don’t necessarily need to run ISL. I am just trying to understand how to get MST to work. 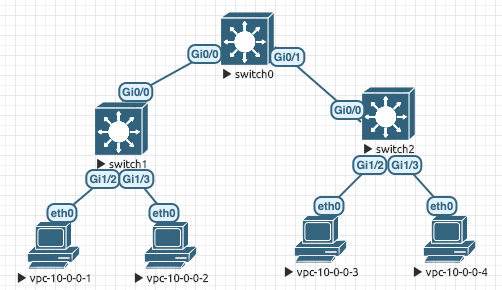 I found my answer, @lagapides. I am using a switch license from CML (vios_l2-ADVENTERPRISEK9-M). Other users on the CML forum are reporting that ISL isn’t working for them. I was unable to set up a simple trunk using ISL, but it worked with dot1q. So, I will have to remember to use dot1q encapsulation when I am using this virtual IOS code.

Great to hear, and thanks so much for sharing your experience. Such information is really useful to all those using the form. Your contribution is much appreciated!