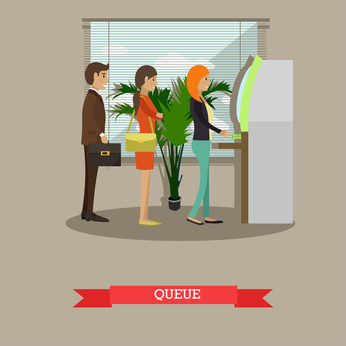 Congestion avoidance works by dropping certain TCP segments so that the window size reduces, slowing down the TCP transmission and by doing so, preventing congestion from happening.

The difference between priority and bandwidth is about the scheduler. Take a look at this picture:

Q1 is “special” since it’s attached to the LLQ scheduler. When something ends up in Q1, it is transmitted immediately…even if there are packets in Q2, Q3, and Q4. Traffic in Q1 is always prioritized over these queues.

Hello Rene,
Thanks a lot for your explanation. However, still needs some more clarification. Lets’ say I have an interface GIg 0/1 that is capable of handling 100 packets per second. I have three different kinds of traffic passing through the interface. They are Traffic A, B and C.

I am just using packets per second instead of MB or KB per second.

As far as my understanding goes, QoS will work like this:

Meaning Traffic A will be delivered first.
Is it correct?

If I draw this, the queue will be like this:

Meaning Traffic A will be delivered first.

If this is the case, then yes this is correct.

Hello Laz,
That was my question and that is the answer I was looking for. Thank you so much as usual.

That’s great explanation but I’m slightly confused with this. I understand that we’re only applying QoS on outbound for example our WAN interface to the ISP so the upload is prioritized . Does it mean he have to apply exactly same policy on outbound interface to LAN so the QoS applies to download ?
For example I’d like to reserve upload bandwidth and put it in priority queue on WAN interface and also reserve download bandwidth for my calls as they enter the LAN ?

If you want to prioritise the download traffic as well, you are correct that you will have to implement it on the appropriate outbound interface. However, the choice of the location of the implementation is important. It would have to be placed on an interface where you know you will have congestion. The outbound interface of the LAN segment would probably not be a good choice because in most cases, the LAN connection is not the bottleneck. In the case of the topology in this lesson, the best place to implement it would be on the Gi0/1 interface of R3, which would be considered the location of the WAN connection into the network.

Hello Laz,
I have a question and I am going to refer to the below configuration for my question.

What is going to happen in this scenario?

As far as my understanding goes, QoS comes into play only during congestion. Even during congestion, if one class of traffic does not use its allocated bandwidth, other class of traffic can use the unused bandwidth. Therefore, this 5M other traffic should be able to go through the interface since there is no voice traffic at all so the voice bandwidth is unused completely.
But I have run into a situation where other traffic is not allowed to use more than 20 % (2M) of bandwidth even though there is no voice traffic at all. It looks like the router is reserving the 80 % bandwidth and not allowing other traffic to use it even though the voice bandwidth is unused. Would you please explain this to me?

I also like to thank you in advance as usual for your help.

On Cisco IOS routers, your priority and bandwidth commands only come into play when there is congestion. Your shaper is set to 10M, that is a hard limit.

When there is no voice traffic, other traffic should be able to get up to 10M. I loaded your config on a router and tried Iperf to demonstrate this:

You can see this traffic is getting shaped at ~9.76 Mbps.

Hello Rene,
Thank you so much for your help. Yes, this should be the expected result, but I am not sure why the router is acting funny. I may have to get with Cisco TAC. Thanks again though.

When looking at the Output of the show policy-map interface command we see matches however I was under the impression traffic would not be sent to the any software queues unless the Hardware Queue was congested first? Are the matches shown in the output just saying "I see traffic but not actually sending it out to the Priority Queue yet). Will the router be using FIFO until congestion?

Another one Guys / Gals

If we use PQ - I assume then that any percent attached to the queue for WRR is ignored. I see in the diagram at the top of the tutorial the PQ has a 50% beside it. I assume this is ignored when the queue becomes a PQ?
Thanks

Queuing on IOS routers is always a software queue, the hardware queue is FIFO. Even when the interface is not congested, you’ll see these hits on the policy-maps. When there is no congestion, your priority queue can exceed the rate you configured. This will only be enforced when there is congestion.

The priority and bandwidth percentages that you set can be 75% in total. The remaining 25% is for “unclassified” traffic and routing traffic. If you have a 50% priority queue, you can still have three queues with let’s say 10%-5%-5% of bandwidth.

Good lesson, but would be good to see further examples and general overview of queuing mechanisms.

Not to mention the Congestion avoidance like RED, WRED CBWRED


it says that the total bandwidth is the bandwidth on the physical interface.

The following documentation also states that the bandwidth percent is a percentage of the underlying link rate.

Comparing the bandwidth and priority Commands of a QoS Service Policy

The bandwidth and priority commands both define actions that can be applied within a modular quality of service command-line interface (MQC) policy-map, which you apply to an interface, subinterface or virtual circuit (VC) via the service-policy...

I’ll let Rene add anything he sees fit to this question as well, from his experience.

Thanks so much for your suggestions! It’s always good to hear what people are most interested in, in order to provide the most useful content. I suggest you go to the Lesson Ideas area of the forum and submit your suggestions there. There are other members that I’m sure would want the same topics to be covered, so the more voices that are heard, the more likely they will be covered.

Once again, thanks for your invaluable input!!

Hello Rene,
How could i simulate ping with tos value on Packet Tracer.
I’ve tried it but it didn’t work ! the DCSP value don’t change

Packet tracer is capable of configuring QoS mechanisms where DSCP values are changed. Can you attempt to create such a lab in packet tracer and show us your results? Then we can help troubleshoot the specific problem you are facing.