Not sure if this is the appropriate place to be putting this question hopefully it is.

The question I have is traffic going out to the internet or ISP from my understanding will always be a default route so how does that propagate through the network? Or do you have default routes going all the way up the network stack? In the image below I have VPC running on D1 and D2 nexus switches for the access switches below it. D1 and D2 have an SVI configured with HSRP for the access switches acting as test hosts. above the distro switches (D1 and D2) I have point to point connections to each router above as seen. RTR1 and RTR2 have default route to CLOUD router and cloud router has default route back to each of them. My question in a nutshell if I want to use all the paths available to get to the internet what is the correct or appropriate way of doing this? Currently in OSPF on RTR1 and RTR2 i have default information originate being used. Currently the D1 and D2 are seeing both default routes is it fine to have multiple default routes being used for redundancy? The other way I could try this is having default routes on the D1 and D2 to both RTR1 and RTR2. But I am not sure what would be the correct way of handling this.

All of this is an attempt to learn how to create redundancy the proper way. 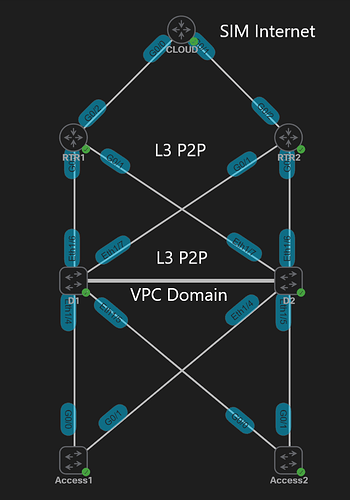 There are many options to create redundancy in such an edge network topology. From your description, I see the following redundancy already implemented:

So at this point, you do have redundancy built into the topology, and such redundancy is perfectly acceptable. Not only redundancy but load balancing, which gives you efficient use of existing links.

An alternative would be to employ a first-hop redundancy protocol such as HSRP/VRRP/GRRP between RTR1 and RTR2, and have those two routers act as redundant gateways for D1 and D2. Alternatively, you can run BGP in dual and multi-homed configurations as shown in the following lesson: 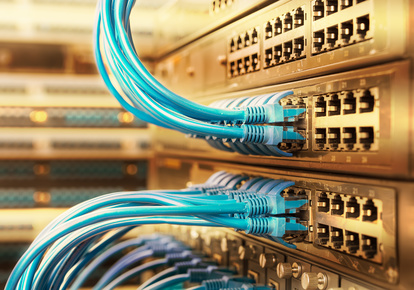 Ultimately, it depends upon what you are running at the edge of your network (devices as well as protocols) that will determine what you will employ. For your particular setup, using HSRP and equal cost routing from OSPF looks like a good fit for the topology.

Yes, this can be an issue, especially for services such as VoIP that require limited jitter and packet loss or reordering of packets, as well as TCP sessions that are sensitive to out-of-order packet arrivals. In order to resolve this, it is possible to adjust the algorithm used for load balancing to base it on either per-packet or per-destination.

More information on how to achieve this can be found in this CIsco documentation: