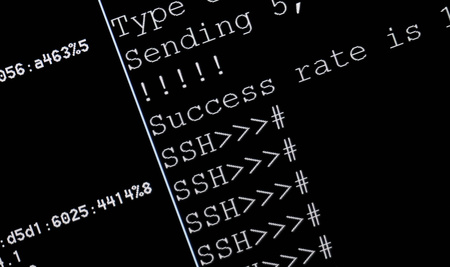 This is a GREAT walkthrough , however I see in the url that it sits in “uncatagorized”, do you have a quick way to browse to this location to locate this walkthrough? I only happened across it via a link in another comment.

Thanks for pointing that out, I’ll give a shout out to Rene to see if it can be located somewhere more accessible.

Hi Rene and staff,
i was doing a basic lab ipv6 with GNS3 and SSH came in front of the scene (no matter ipv4 or ipv6 in this post)
This is the lab 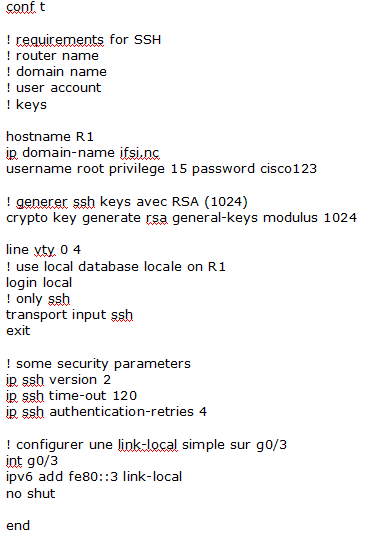 I opened the ssh session 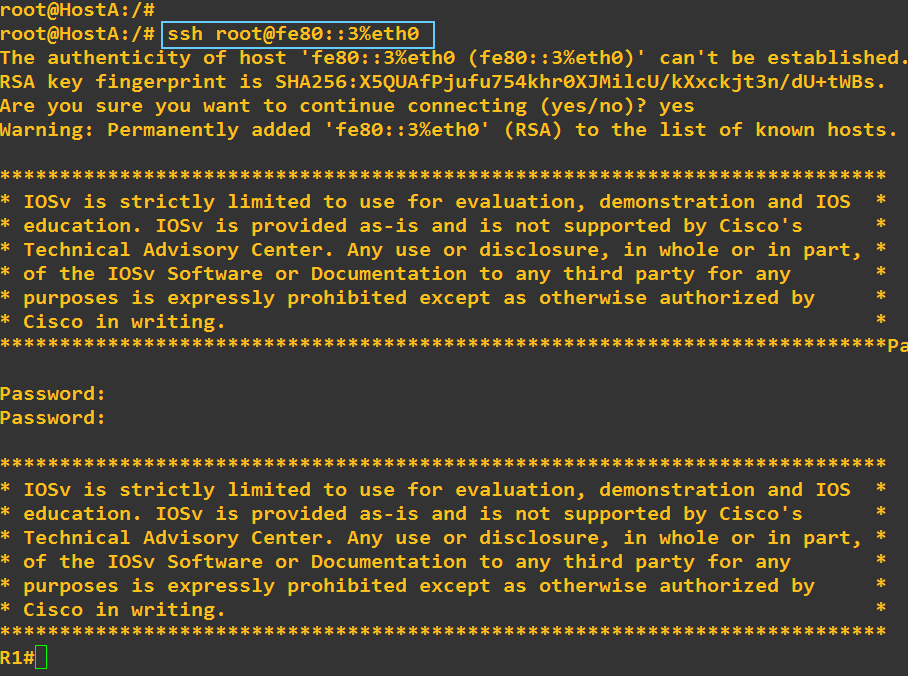 At this step, my question is about to find the public key of R1 in hostA

Going to hostA here is what i found
(vi /root/.ssh/known_hosts)

Going to R1 here is what i found 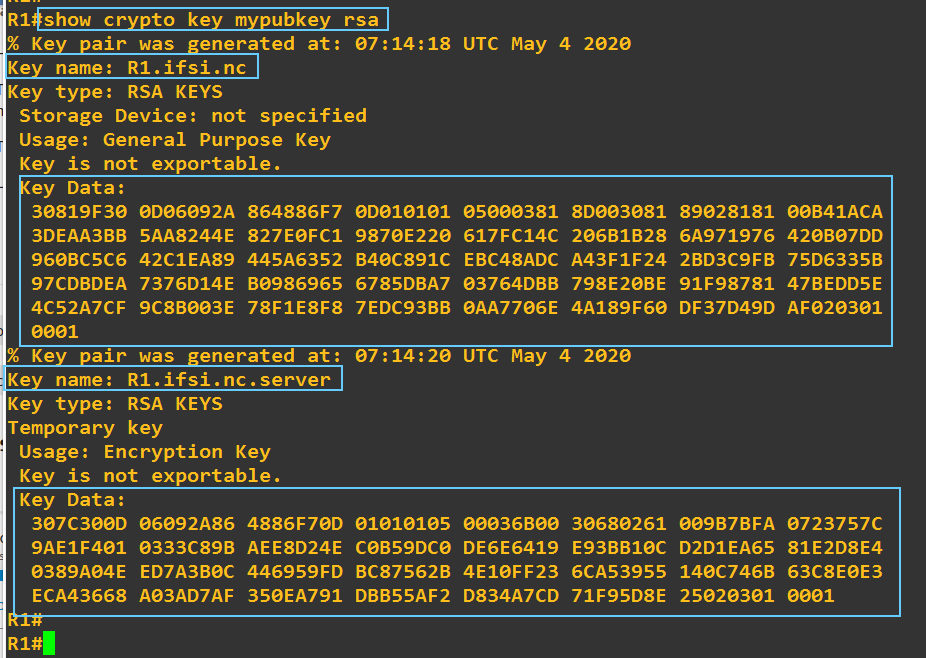 Key data on R1 seems not to match with the content of the file known_hosts in the client hostA: that is what i want to understand
If i am in a wrong way please tell me so i could understand
Regards

This is a great walkthrough but I have an older 3560 in my lab and the ip ssh pubkey-chain command doesn’t exist. Is there a different method to accomplish this on older switches? Here’s the image it’s running:

Second question: How can we setup authorization so that successfully authenticating with radius puts you in priv exec mode?

If you take a look at this Cisco command line reference, you’ll see that this command was introduced in version IOS 15.0

It seems that the 3560 platform doesn’t support public key authentication for SSH. The following documentation however describes how to secure SSH communication:

How can we setup authorization so that successfully authenticating with radius puts you in priv exec mode?

Yes, it is possible. Take a look at this Cisco documentation:

Hi,
As far as i understand, in the procedure a local username is used (WINDOWS_USER) and added to the configuration of the IOS device

But this is still a local username which has to be added to the switch/router/ASA… . Is it possible to use ssh keys while authenticating with a Tacacs+ username ?

Thanks a lot,
Olli

It seems that SSH Public Key Authentication is only available for local username authentication. This can be seen in the following Cisco documentation:


As I don’t have personal experience with SSH Public Key Authentication in combination with an AAA system, doing a bit of research online, there seems to be the consensus in general on other sites focusing on RADIUS and TACACs that this is not possible. Although it is not stated clearly anywhere official, the general experience of users seems to indicate that it is not possible.

So I’ve been experimenting with FreeRadius and have a radius working with a “Cleartext-Password” (still researching what other versions I can use) however if I create a public key for myself on the router, it will begin logging me in, show me the motd, then disconnect me. I’d like my ssh public key in free radius and not on the router (to begin with) and of course would like the login to complete.

Still trying to debug why it boots me after doing the pubkey handshake.

! note that my radius server is on the VRF-lite “relay_admin” network

Don’t know where to put the ssh key or if there is a table entry for it in the radcheck?

Looking through some of the posts and links above may help you in further understanding this approach. If you have any further questions, just let us know!

Hi rene and staff,
there is so much stuff to do, i am going between forward and back between CCIE lessons to test as much things as i can
I come back to this lesson just to ask a question about thing that is surprising me
in ubuntu (18.04), the user dom generates its rsa keys pair: id_rsa the private key and id_rsa.pub the public key
I found no problem to work with these keys, for example to authenticate the user “dom” with its ssh keys to ssh a router (IOS or ASA)
But I got the idea to test more ubuntu commands like

(-E sha256 is default)
This command output says that the private key is 2048 length and the hash with sha256 is
tyrl5gd0ADJfwDlhiOiXqMfw+mf8XRjGIMoXc6piJPA
Is not it ?
Then i try to verify the hash with the command sha256sum

the 2 hashes dont match inside the same ubuntu version
I dont understand why: i do some google search but i dont find any response
Could you give me help ?

Looking over some of the commands myself, I have found the following:

The ssh-keygen command used to generate what it calls an RSA key fingerprint. This fingerprint for this particular command seems to be 43 characters long. The output for the sha256sum command is always 64 characters long. So there are two things I have in mind here:

So based on these two things, I think that the two things you are actually comparing are apples ad oranges. That is, they are two different things that are not expected to be the same. I hope this gives some insight into the results you see.

I have a strange issue with ssh and hoping someone might have an idea of what the issue could be.
I recently configured a couple of brand new cisco 9300 switches and set them up for SSH access.
However I cannot SSH to them from a client PC or any pc or server on the same network/subnet even thou I can ssh into all other switches from any pc or server on that network.
I can however successfully connect to them from other switches on the same network/subnet from the cisco cli using ssh - l [username] [switch ip]
I know its not my config as its fairly basic stuff to set this up and I’ve configured thousands of switches for this over the years.
Its not the firewall as I’ve checked there and nothing blocking them either and nothing allowing the ones I can ssh to.
I’m at a total loss as to why the only way I can access these switches is by using ssh from another switch on the same network/subnet.
So just to clarify if I plug a pc into this subnet I can ssh to all other switches on it but I can’t ssh to these new switches directly, the only way I can ssh to them is by ssh into a switch on the same subnet and then ssh from the cli of that switch into the new switches.

There may be a number of things going on in this scenaro. The first thing to notice is that you are using two different SSH clients, one on the PC, and one on another switch. The switch’s client can successfully connect, while the PC’s cannot. From my understanding, this is the case for all 9300 switches you have, and is not the case for other Cisco IOS switches, correct?

So there is some config on the PC’s SSH client that is not being accepted by the 9300 switches. And it’s probably something new compared to configs made on the older IOS switches.

I was looking at some of the documentation for SSH for the catalyst 9300 switches and noticed the following:

Now I’m not saying that this is the issue, but I am saying that there are particular restrictions and configurations that are required depending upon the software image you are using, and it could be one of these that is causing the problem.

If you’re using Putty on your PC, you can also enable logging there by going to Logging and selecting SSH Packets before connecting.

Looking at these should put you in a position to make some better determinations as to why your ssh sessions are failing. Let us know your results so that we can help you further in your troubleshooting process.

Thanks Laz,
The issue only effects some 9300’s and others not.
They all came in the same batch so its very strange.
I will take another look and see what the error was as I cant remember off top of my head.
I will try the “debug ip ssh” command as you suggested and see what it throws back when I try to connect. Thanks Laz.