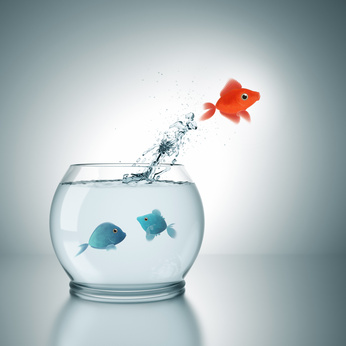 OSPF has different next hop IP addresses depending on the network type that you use. In this article I'll show you the difference.

If we use distance vector routing protocol the next hop ip address will be the hub router in both of broadcast & non-broadcast network types ? that’s right ? or I’am wrong ?

If we use OSPF non-broadcast network type we need to configure spoke router to become OSPF neighbors as well as create additional frame-relay maps ? that’s right ? please correct me if I wrong ?

As long as the spoke routers are neighbors with the hub then the spokes will be able to learn all prefixes. The only problem is that with the broadcast and non-broadcast network types, the spoke won’t know how to reach the next hop of another spoke…that’s what you need the frame-relay maps for.

Routing protocols like EIGRP or RIP don’t have the broadcast and non-broadcast network types that OSPF has. By default they use multicast and if you use the neighbor command they switch to unicast traffic only, that’s it.

The next hop will be the Hub router though, you can see see an example here:

So how can the spoke router reach other with one hop if they did not have PVC ?

What do you mean exactly Hussein?

We have only 2 PVCs :-
1 – between hub & spoke 1.
2 – between nub & spoke 2.
that mean if spoke 1 wants to reach spoke 2 he must go through the hub router ? right ?
My question is if the OSPF network type was “broadcast” or “non-broadcast” the next hop will be the router advertising the network so how the spoke routers can reach each other if there is no PVC between them ? do you mean if we create the frame-relay maps we also create PVC between spoke routers ?

With a hub and spoke topology we only have two PVCs so spoke-to-spoke traffic always has to go through the hub. When you use broadcast or non-broadcast, each spoke will see the next hop IP address of another spoke for updates that they advertise.

In this case, you just create a frame-relay map on each spoke with the DLCI number of the local spoke and the IP address of the remote spoke. The IP packet will be sent to the hub which forwards it to the correct spoke, that’s it.

Ah ok I see, yes you are right. With OSPF the next hop changes depending on which OSPF network type you use.

When you use RIP or EIGRP, the next hop will be the hub, doesn’t matter if you use unicast or multicast for the neighbor adjacencies.

Thank You again for Brilliant explanation. Now I have a challenge to on my lab environment to configure the switch which will connect between HUB and Spoke1 and 2 as frame relay. is it possible to get clarification on that step by step with picture example if possible.

Take a look here, it’s a step-by-step walkthrough how to configure a router as frame-relay switch:

This is by the far the most explanation for CCNP.
My question is why do we have to elect DR/BDR on Non Broadcast network? I thought DR/BDR are only needed on broadcast networks?

You make it so easy! That’s awesome, thanks Rene!

Thanks for the detailed explanation.
After learning the configurations for different types OSPF networks, I’m now wondering under what kind of scenarios would we apply for each network?

These OSPF network types have been developed based on the requirements of real life networking scenarios. Broadcast is the network type that is used by Ethernet, and is the default for OSPF. All other network types were created primarily to accommodate a very prevalent WAN technology during the 90s and the beginning of the 2000s, Frame-Relay.

Because frame-relay is unable to accommodate multicast and broadcast communication, something that is necessary for OSPF to function, ways had to be devised to allow OSPF to operate with frame-relay. This was the primary motivation for introducing these network types.